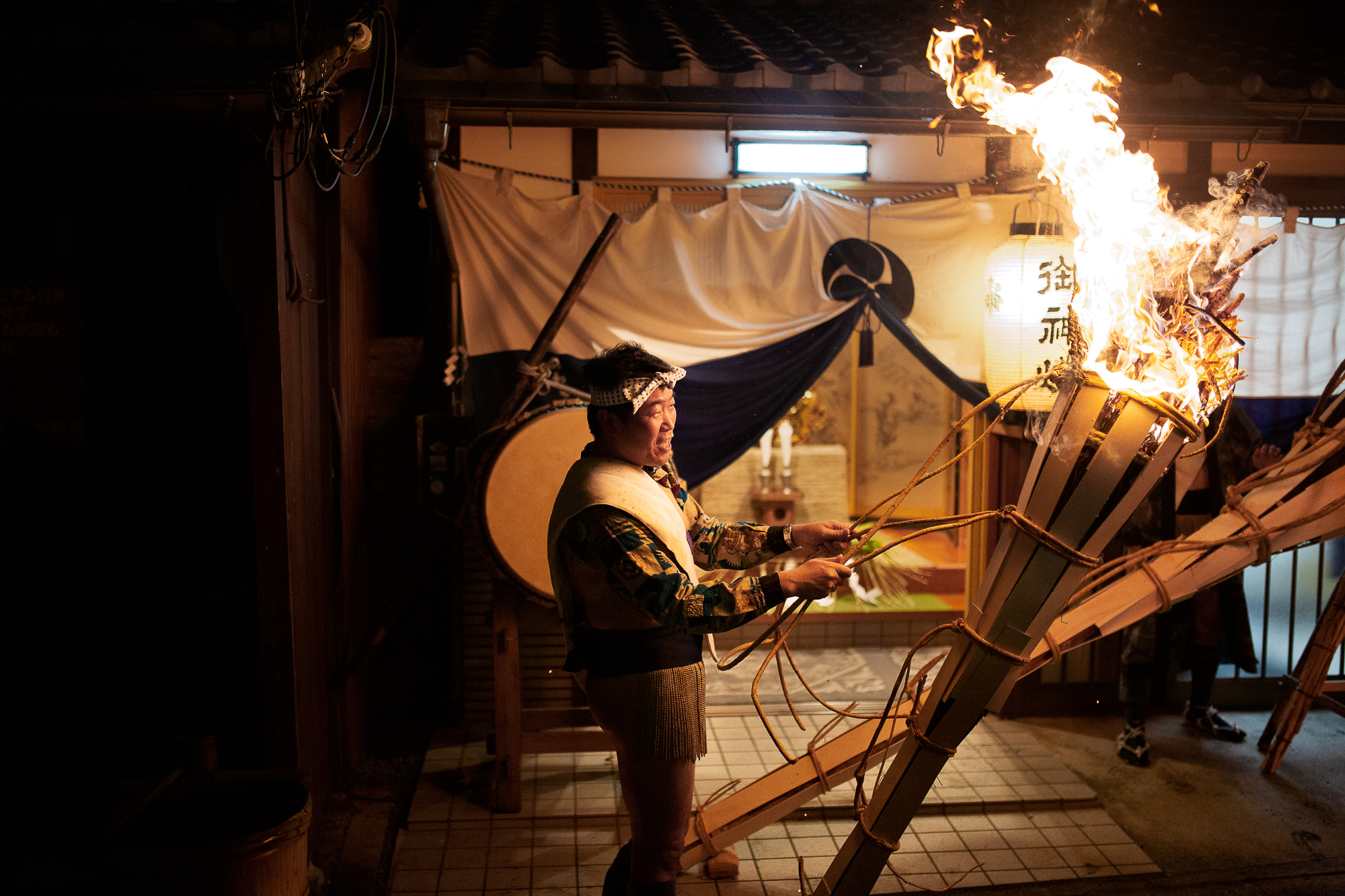 The Kurama Fire Festival is probably one of the most important events in the Kyoto area. In early autumn, Kurama lights up with a thousand lights during this festival, which combines folklore, tradition and rites of passage.

The wagons shake in fits and starts. The train continues on its way through the forest, illuminated by the rare rays of sunlight breaking through the clouds. The wind sweeps timidly through the tree tops. Some of them are beginning to dress for winter with carmine and amaranth red dyes. The sky is threatening and gives the sacred mountain of Kurama a striking contrast with the forest. The sight is soothing. The forest is a place of reverie, as in Miyasaki’s famous films, and the tremors of the train are like a lullaby. It doesn’t take long to get lost in your own dreams.

Kurama station is the terminus of the Eizan line. It is already cool in October. The village of Kurama is nestled on the slopes of the mountain of the same name, near Mount Kurama, north of Kyoto. Kurama seems to be far away from everything, even though we are only a few dozen kilometres from Kyoto. The train that brought us to this village seems to be the only way to reach the distant imperial capital. Time seems to have had no hold here, having abandoned Kurama to its fate. Beautiful houses with wooden fronts line the main street. For the ordinary tourist, this traditional architecture allows you to immerse yourself in the Japan of yesteryear, the Japan of the samurai, the farmers in the rice fields and the merchants roaming the countryside. A sweet perfume of disorientation invades us. Perhaps we are not quite awake yet.

The streets are quiet, the forest is expressed by the whistling of the wind in the leaves. Only the restlessness of the police disturbs the apparent calm. There are about a hundred of them in the village square. Kurama must have fewer inhabitants. It seems almost unreasonable. Yet a tension is felt in the air. We see them waving plans around, discussing amongst themselves. They are getting ready for the long and hard evening ahead.

While waiting for the festivities to begin, we find one of the only restaurants open in Kurama. The smell of rice and fish fills the nicely decorated interior of the restaurant. The meals are brought to us quickly, with the smiles of the old restaurateur. Quick service is the order of the day, even in Kurama. The miso soup is served in a wooden bowl, the fish is grilled to perfection. In good French, we take our time to taste this appetizing dish.

As we leave the restaurant, we suddenly understand the magnitude of the festival we are about to attend. In that short time, hundreds of tourists have appeared on the street. The small mountain village seems to be overwhelmed by an endless stream of travellers, as curious as we are to see the fire festival. Every twenty minutes, a new train arrives at Kurama station, filled with curious diehards. The police are already in action, asking the newcomers not to block the station entrance. Whistles, commotion, the politeness of the policemen asking not to stand still, saying “sorry” of course. The main street is cut in two to allow the festival to take place in good conditions.

We have no choice but to go around the village. The policemen are there to make sure that everyone moves forward. We are not allowed to stand still. In front of the houses are huge torches, also called taimatsu. These torches are made of pine and are up to three metres long and weigh about eighty kilograms. The men carrying these torches can be considered as athletes. It takes barely half an hour to walk around the back of the village, before returning to the main square.

At this point, it is no longer hundreds of people who have come to attend the Kurama Fire Festival, but thousands. The fire festival is one of the most popular and beloved events in the Kyoto area. The origin of this festival dates back to the year 940, when Kyoto was hit by an earthquake. The temple now called Kuruma-Dera was moved to Kurama, north of Kyoto, because this area was considered the gateway to ghosts and spirits. And the fire festival gradually became a rite of passage to adulthood for the young men of the village.

At the beginning of the night, the main street of Kurama lights up with a thousand fires. On both sides of the street there are metal fireplaces that let out huge flames. The first part of the festival takes place in the streets of Kurama. Young and old alike carry the famous taimatsu to the Yuki-Jinja temple further up the mountain, before returning to the Kurama-Dera temple. It is precisely in this temple that the second part takes place late at night. We will not attend.

The flames of the taimatsu are huge and we feel the heat of the fire so close to us. It takes several people to help place the taimatsu on the shoulders of a carrier, not without difficulty. The people of Kurama celebrate in good spirits, despite the horde of tourists. The whole family is together and everyone participates, whether it’s carrying the taimatsu, lighting the fire, or simply singing melodious songs. It seems that all the magic of Japan has come together at this moment, at this time. To see these people in traditional dress guided by their faith and spirituality is almost moving. Above all, there seems to be a fervour to protect the oldest traditions. We are amazed.

Amazed, but also disappointed. The crowd is so suffocating that after the second tour of the village, we no longer appreciate the moment. There are far too many people to be able to attend the festival in peace. The mythical pedestrian crossing in Shibuya in Tokyo is nothing compared to Kurama at this moment. Also, the flames of some of the torches are so close to the tourists that it is dangerous. Everyone is jostling each other. The policemen, even if very polite, shout through loudspeakers that we have to keep moving. The festival becomes stressful, more unpleasant than going to a shopping centre on Christmas Eve. After returning to the station, we don’t ask ourselves the same question twice and return to Kyoto on the first train.

We walk down the mountain in total darkness, feeling that we have experienced something wonderful, up there in Kurama Mountain. This year’s festival, which is more than 100 years old, once again showed the courage of the young men of Kurama, to the delight of thousands of tourists. 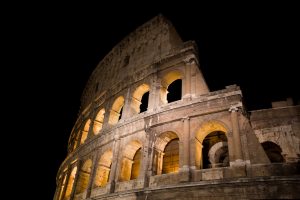 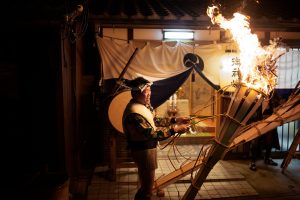 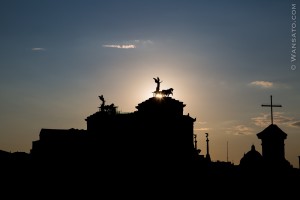 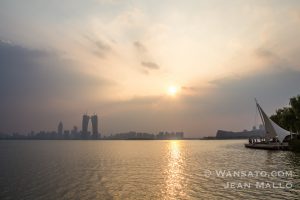 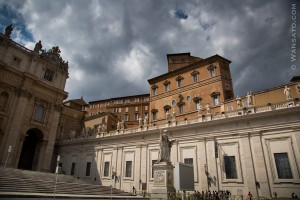 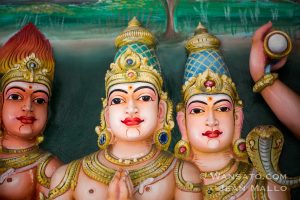 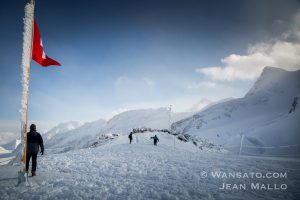 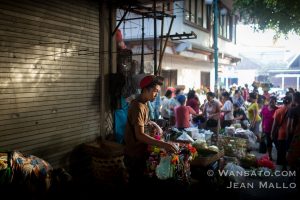 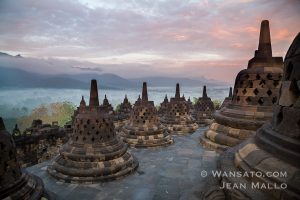 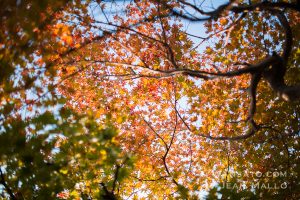 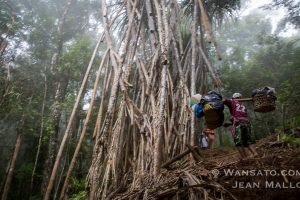